Published on September 28, 2021 No Comments
Jump to Recipe Creamy and full of cozy flavor, this Apple Pie Chia Pudding is a perfect snack/breakfast to kick in Autumn. Also, it’s super easy to make, with only 6 simple ingredients!

As the autumn kicks in, I know we all expect some apple flavor, right? At least I DO. This Apple Pie Chia Pudding is a great start for our “apple journey.”

Chia pudding is one of the easiest things to make. But I have to say it’s also one of the things that I probably would never get tired of because you can make it into as many flavors as you like.

This time it’s one of my favorite flavor: Apple Pie!

We just need a handful of ingredients for this apple pie chia pudding.

It’s quite easy and straightforward.

First, add non-dairy milk, chia seeds, almond butter, and apple pie spice into a jar, and mix them together evenly. The mixture will be runny at this point.

Second, cover the jar and put it into the fridge for at least 4 hours. It will thicken up as it sits in the refrigerator.

Last, when you are ready to serve, take it out from the fridge and add chopped apples, pecans, cinnamon, and more almond butter on top. Enjoy!

This chia pudding can be store in the fridge for about 3~5 days, depending on the coldness of your fridge. I usually just make it the day before and finish the whole thing in one go. But it’s definitely also a very good recipe for meal prep.

Can I use other nuts instead of pecans?

Yes, you can! Pecans come first for my recommendation, but other nuts like walnuts and sliced almonds would be nice too.

Can I use peanut butter instead of almond butter?

I wouldn’t do that because peanut butter is quite strong flavorwise. But if you really want to do that, I won’t stop you. But just keep in mind that the peanut butter flavor might overwhelm the apple pie spice.

That’s it. I hope you will like this simple, yet still, delicious recipe as much as I do. If you have any questions or creative thoughts, you are more than welcome to leave a comment down below! Cheers. 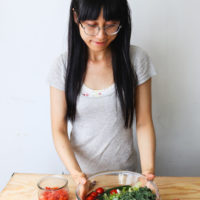